From Open Perpetuum
Jump to navigation Jump to search

SAP (full name: Service Access Point) system is the way to influence the stability of Beta outposts. Each outpost that is currently owned by a player corporation, has a stability meter, represented by a number and icon above it when in Map view. This meter is how strong is the control of said corporation is over the outpost in question. To take over the outpost, you need to take it down to zero and then build it up again using SAPs.

Whenever the owner corporation completed a SAP, they get a bonus to stability of the outposts.

Conversely, whenever anyone except allies of corporation completes one, they reduce the stability.

When it hits zero, outpost loses the ownership, and become neutral. To capture it, a corporation needs to complete any sap activity.

To see the progress of a nearby (within 1000 m) SAP, open the Intrusion window (CTRL+I by default).

You can also see an active intrusion event based on regular Detection - an open SAP has masking of 25 rF and should be detectable from around 3-6 km (depending on the bot).

To know when the SAP starts, you need an Intrusion scanner charge loaded into a Geoscanner. Approach the outpost to 100m or less and activate it to get a reading on the next available SAP.

Passive SAPs require a member of a corporation standing in the capture circle for about 10 minutes. Leaving the cicrle resets the counter for a player, but each player has his own timer you can see in the Invasion Window. Progress is individual so only the player with the highest number counts.

Reward is given for everyone with at least 1 point of capture when the SAP is captured and usually consists of plasma and kernels. In rare cases it can also include an EP booster (+1x, 1hr). The chance for EP booster is higher if the outpost stability is low.

Passive SAPs are worth 10 points of stability of the outpost.

To complete an active SAP, you will need to target the SAP and activate SAP Hacking module. Hacking process will take around 10 minutes, and will not be reset if a player deactivates it or leaves the area. Hacking progress is individual, but everyone with at least 1 point of capture will recieve an EP reward on succesful capture.

Active SAPs are worth 15 points of stability of the outpost.

Specimen SAP require a player to deposit several special commodities, Outpost Energy Modulus into the SAP. It is one of the faster SAPs, with time to complete ranging from 6 to 8 minutes.

Progress is individual, and several players depositing at once will only get a total of single point for themselves, not the corporation. Therefore, the optimal way to make one is usually a Daidalos loaded with 18 (maximum possible amount) OEMs depositing them in normal order.

Specimen SAPs are worth 15 points of stability of the outpost.

Destruction SAP is a little bit unique compared to previous ones. First of all, the progress is not individual but corporate. And second, it is theoretically the fastest type, as it has no limits to players contributing at once.

To complete it, the corporation needs to shoot the SAP with any weapon possible. Note that it has a surface size of 6 m and medium weapons start to lose effectiveness when shooting it, while large weapons are next to useless.

Destruction SAP has a total of 30,000 HP with no resistances and whichever corporation did more damage to it at the moment when it's destroyed, gets to affect the outpost. This also means you can use it tactically, to deny your enemy doing it by doing 15,001 or more damage but not completing. Loot reward consists of PVP ammo of the relevant faction to the island (e.g. Alsbale SAPs will drop Missile ammo, Kentagura - laser ammo)

Destruction SAPs are worth 15 point of stability of the outpost.

Other methods to influence outposts

SAP relics act similarly to SAPs, except that they drop or raise outpost stability instantly whenever someone goes over them. Upon activation, the player recieves a PVP flag, an EP reward typical for a SAP and a container drops with some plasma and common fragments.

Whenever on the beta island, keep your ears open for a very distinctive sound the SAP relic produces. It should be audible whenever you're within 600-800 meters from one. Once picked up, a new one for the same outpost will spawn in around 4 hrs. 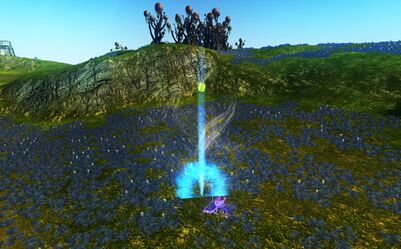 SAP relic in the wild

Guardians are NPCs patrolling an outpost within a very close range (300 m or less). They are normally passive but are quite powerful whenever engaged. They will not chase players much outside their normal partol distance however. Destroying a Guardian always reduces the outposts' stability by 3 points, regardless of who killed it. After destruction, the Guardian will respawn in around 8 hours.

Invaders are NPCs somewhat opposite to guardians. They partol at some distance (up to 3km) from the outpost and whenever killed. They are as powerful as Guardians, but are much more relentless. It is much harder to escape the Invader since it has a much bigger chase range. Destroying one will always increase the stability of an outpost by 2 point. After destruction, the Invader will respawn in around 8 hours.

Retrieved from "https://perpetuum.miraheze.org/w/index.php?title=SAP&oldid=1065"
Category:
Cookies help us deliver our services. By using our services, you agree to our use of cookies.